The Jurassic Coast is England’s first natural World Heritage Site. It has joined the ranks of the Grand Canyon and Great Barrier Reef as one of the wonders of the natural world. What makes this coast unique is that it records 185 million years of earth history in just 95 miles.

The key to the area’s geological diversity is that between Exmouth In East Devon and Studland In Dorset, the rocks generally tilt gently to the east. This means the oldest rocks form the cliffs in the west and progressively younger rocks dip down to form the cliffs In the east,

The rocks of East Devon date back to the Triassic period when vast deserts covered the area. The dark clay rocks at Kimmeridge belong to the Jurassic period and formed in a tropical sea. Towards the end of the Jurassic and the start of the Cretaceous period, sea levels dropped and a forest grew. Later, dinosaurs roamed through an arid landscape of salt flats. Towards the end of the Cretaceous, sea levels rose again and a huge thickness of White Chalk formed,

Life flourished during this time and evidence of this is found in the form of fossils. The huge variety of rock types has created many different coastal landforms including landslides, beaches, bays, headlands and sea stacks, Not surprisingly, this coast Is a geologist’s paradise and represents ‘a walk through time’. 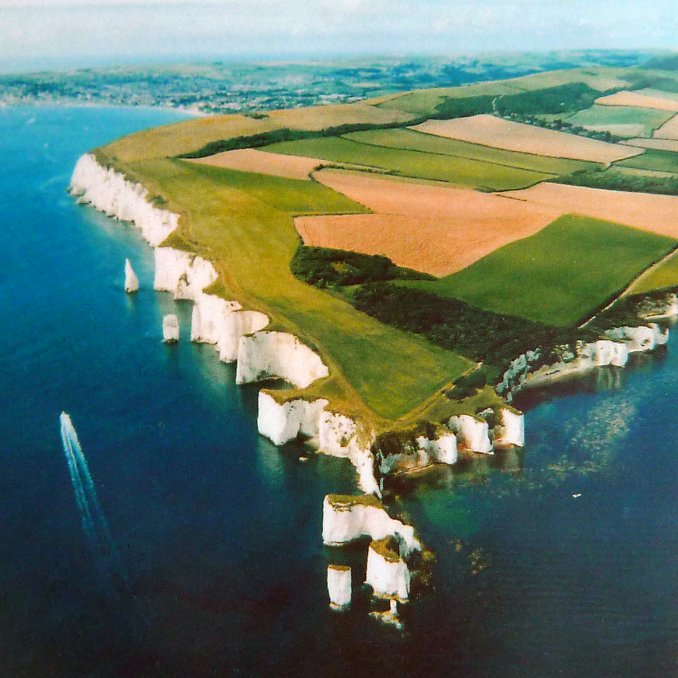 Old Harry Rocks. The Cretaceous chalk at 80 to 100 million years in age, is the youngest rock on the World Heritage site.

Perhaps the most famous UK dinosaur, Iguanodon could reach a length of 10 metres and weighed in at several tonnes. It was a vegetarian and probably lived in herds. The thumb spike on the front limbs may be for defence but it could also be used to drag branches to within reach of the mouth.

The giants of the Jurassic and Cretaceous, sauropod dinosaurs had four massive legs and a long neck and tail. They were harmless vegetarians and spent time lounging in the water to help support their enormous weight. Some footprints left by these animals were uncovered in Keates Quarry at Acton near Swanage in 1997.

These meat-eating dinosaurs reached a size of 6 metres or more. Megalosaurus means “big reptile” and it was the first dinosaur to be identified, in Oxfordshire, in 1824. Today, these animals are often referred to as Therapods, a group that includes the largest carnivores known. Purbeck’s therapod dinosaur is known as Metricanthosaurus, or “long-spined reptile”.

The Purbeck Beds are famous for the footprints but there are hardly any bones … why? At one level the answer is simple: each dinosaur made millions of footprints in its lifetime. However, there should be more bones than have been found, and this does remain a mystery. 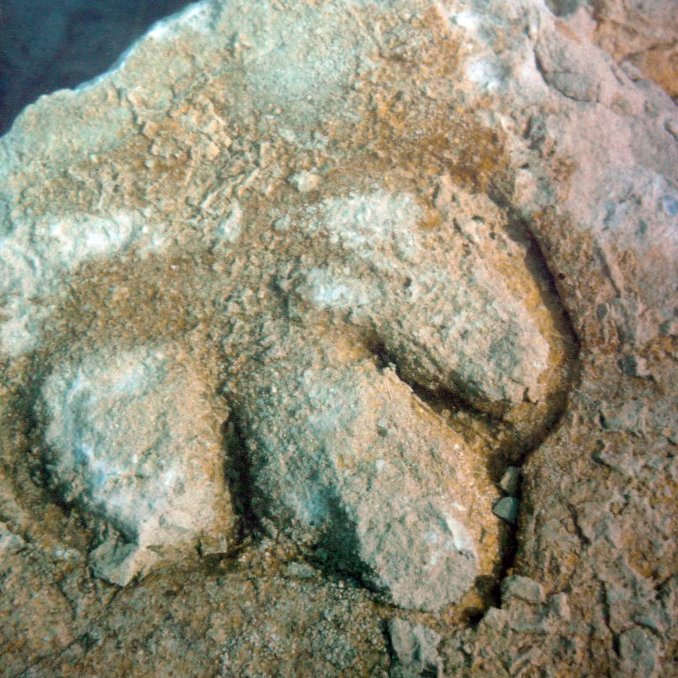 The Geology Of Purbeck

The coast between Old Harry Rocks and Durlston Head is a window into the ancient past and a time when the dinosaurs walked the Earth. The Portland Limestone is exposed in the towering cliffs along Purbeck’s southern flank. These rocks date to the end of the Jurassic Period and formed in shallow seas where giant ammonites swam.

The rocks have been tilted and folded by unimaginable forces from deep within the Earth. Running right across Purbeck is a huge fold or kink in the rock layers. At Bats Head, west of Durdle Door, the Chalk layers dive vertically into the ground.

At Lulworth, the Purbeck Beds have been crushed into the Lulworth crumple. The famous Fossil Forest is exposed on a ledge in the cliffs just west of the Cove. The soft Wealden Clays have been washed away to form the perfect bay. These rocks also lie under Swanage Bay.

The Chalk, tilted on end, forms the ridgeway that runs from Lulworth through Corfe Castle and on the Ballard Down, north of Swanage. It also extends under the sea to the Needles on the Isle of Wight. This huge fold is the most northerly crumple from the process that formed the Alps in Southern Europe, about 35 million years ago. The effect is dramatic as hard and soft bands of rock are weathered at different rates to form the distinctive and beautiful Purbeck coast and countryside.

Always stay away from cliffs. Rock falls can happen at any time. Always check the tides and take care in times of rough weather. 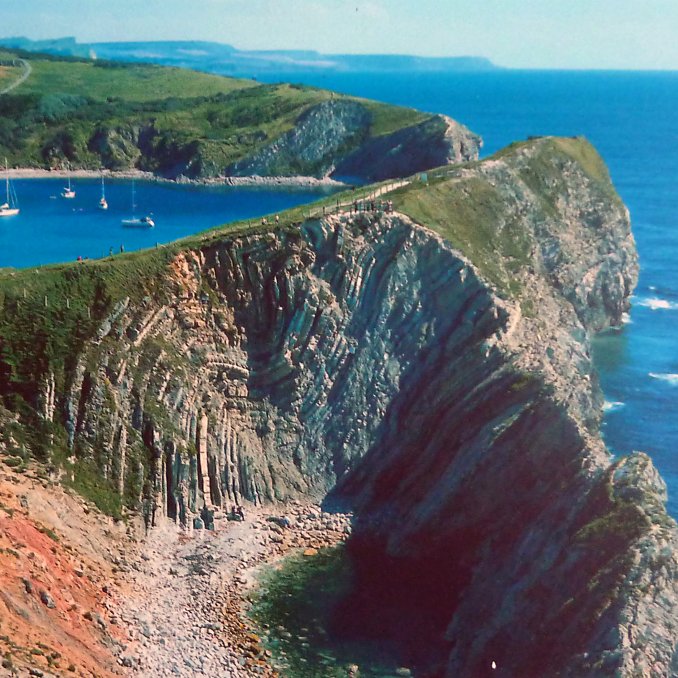 Stair Hole. Part of the huge fold in rocks that runs across Purbeck.