The Isle of Purbeck has attracted artists of all kinds for centuries, lured by the spectacular coastal views and wide variety of subject matter – both natural and man-made. The Museum has a great deal of information on artists of the past for you to enjoy.

The first artists in Purbeck were the topographical artists anxious to record outstanding landmarks and grand houses, whose owners were anxious for them to be recorded and the resulting prints to be sold. The Buck brothers Samuel (1696-1779) and Nathaniel (active 1724-1759) were the most important of these in the 18th century, creating a record of over 500 ancient monuments & towns in England and Wales. Landed gentry were keen to have their family homes included in these records either as single sheets, or bound in volumes and many artists and engravers were involved in this work.

Samuel Hieronymus Grimm (1733-1794) was born in Switzerland abd travelled through France arriving in England in 1768. He was adopted as a travelling companion by the Reverend Sir Richard Kaye who was Rector of Kirkby-in-Ashfield and his role was to record anything curious. In 1790 he was in Purbeck producing many ink and wash drawings of Corfe Castle and elsewhere in Purbeck including Swanage and Lulworth. 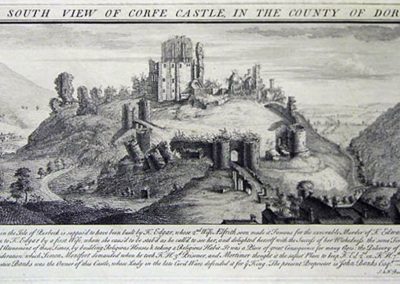 THE SOUTH VIEW OF CORFE CASTLE 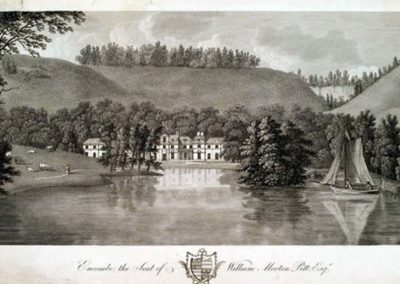 Engraving 1774 by Victor Marie PICOT (1744-1805) from the painting by William TOMKINS (1730-1792) which appears in The History and Antiquities of the County of Dorset by John Hutchins. 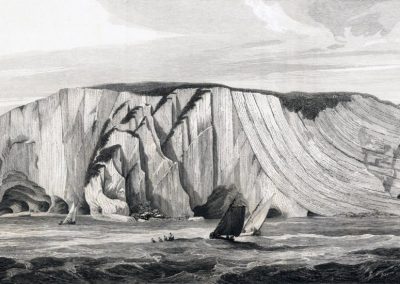 Webster, Thomas (1772-1844). Appears in Sir Henry Englefield’s ‘Description of The Principal Picturesque Beauties of the Isle of Wight.’ 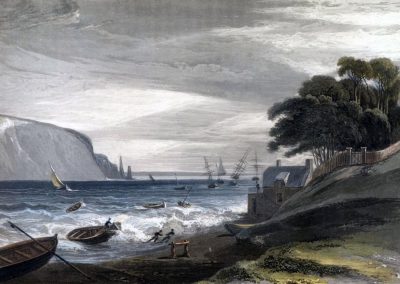 One of Joseph Mallord Turner (1775-1851) earliest commissions was to colour, by hand, 70 etchings for Henry Boswell’s volume of picturesque views of the antiquities of England and Wales. This earned him tuppence an image and didn’t require much in the way of skill. But it did introduce him to many sites that he was later to visit himself. He most probably did an early image of Corfe Castle c1793 by copying an image this way. He did visit Purbeck in 1811 gathering images for the volume Picturesque Views of the Southern Coast of England which were engraved by William Bernard & George Cooke.

At the same time or a short while before this, Thomas Webster (1772-1844) was gathering detailed geological images of the coast to complete a commission from Sir Henry Englefield for inclusion in his volume ‘Description of The Principal Picturesque Beauties of the Isle of Wight’.

Two years later, in 1813, William Daniell (1769-1837) embarked on what was to be his most important artistic achievement ‘A Voyage Round Great Britain’. The work was published in eight volumes between 1814-1825 and consisted of 308 plates.

From the middle of the 18th Century many artists and amateurs increasingly used watercolour as their preferred medium. In 1804 the Society of Painters in Water-colours was formed and despite several name-changes, still exists as the Royal Watercolour Society today.

The Government School of Design was set up in Somerset House in 1837 and after The Great Exhibition of 1851 moved to South Kensington next door to the South Kensington Museum (now the V&A) and was re-named The National Art Training School. Simultaneously, more than 130 Art Schools were set up across the country. As well as training artists, they functioned as Teacher Training Colleges ensuring that Art was on the curriculum in schools, which resulted in a great increase in the number of artists in the second half of the Nineteenth Century. 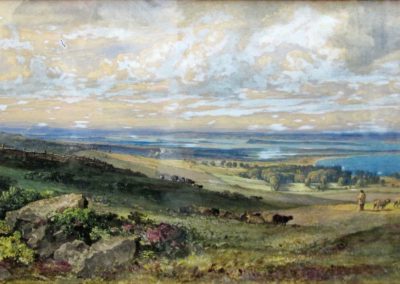 A VIEW FROM BALLARD DOWN LOOKING OVER POOLE HARBOUR 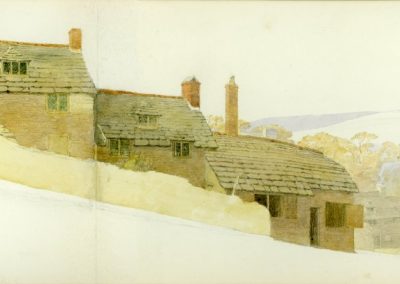 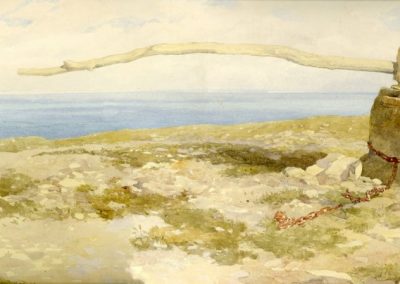 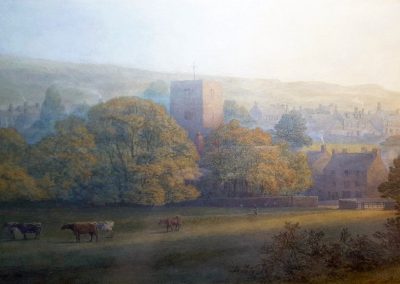 The Isle of Purbeck’s coastal scenery and the wonderful light drew many artists to paint here, as well as Corfe Castle and the surrounding hills, local quarries, the Norman churches at Studland and Worth Matravers. When their paintings were exhibited, they attracted many artists and students. In 1847 Wareham Railway Station opened on the London Waterloo to Weymouth line and made access to the Isle of Purbeck an easier, shorter journey than to Cornwall, Suffolk or Yorkshire that had become great centres for art colonies. What was lacking was a permanent art school or a resident artist of stature as the centre of an artistic colony.

The Fripp brothers, George Arthur Fripp (1813-1896) and Alfred Dowling Fripp (1822-1895), painted many pictures of the area. They were grandsons of Nicholas Pocock, the marine artist who was one of the founders of the Old Watercolour Society. George was one of the foremost watercolourists of his day. In 1864 he stayed at Balmoral when he was commissioned by Queen Victoria, a great admirer of his work, to paint a series of views. His younger brother, Alfred married in 1849 and when his wife died in 1850 he spent a decade in Italy returning in 1859. He married again in 1861 and settled in Blandford, spending summer holidays in Swanage where he painted many pictures of local children. In 1870 they moved to London following his election as secretary of the Watercolour Society spending their summer holidays in Lulworth.

For the first part of the Twentieth Century, art in Purbeck was dominated by the pupils and teachers of the Slade School and the New English Art Club. Philip Wilson Steer, who was a teacher at the Slade came on a painting holiday to Swanage in 1890 and painted some memorable images here. He returned in 1908 with Fred Brown, the Slade Principal, staying at Rollington Barn. Other members of the staff who painted here include Henry Tonks, his successor Randolph Schwabe and Walter Westley Russell.

Ex-Slade pupil John Everett was the catalyst who brought fellow pupils to Swanage where his mother ran a guesthouse. In 1900 he brought Augustus John and Charles Condor. John brought his sister Gwen here and with Everett’s help later settled nearby at Alderney Manor. The Australian artists Arthur Streeton and Tom Roberts visited Everett when he was married and living at Arfleet Mill near Corfe.

Other ex-Slade pupils include Evelyn and Charles Cheston who stayed in Studland and Furzebrook for a few years around 1908. Helen McNicoll, the Canadian Impressionist visited and painted here and died here in 1915 and is buried in Northbrook Cemetery. Perhaps the most famous ex-pupil was Paul Nash who from the autumn of 1934 to the spring of 1936 lived and worked in Swanage and was inspired by the area to create many of his most memorable paintings. 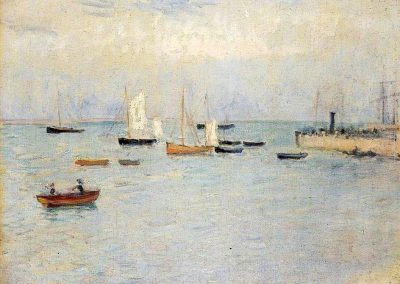 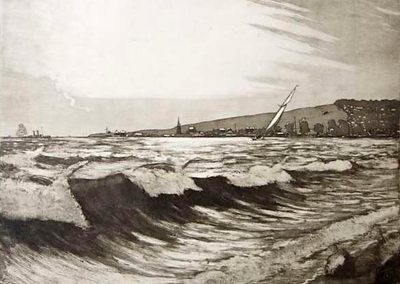 A SLOOP IN THE BAY 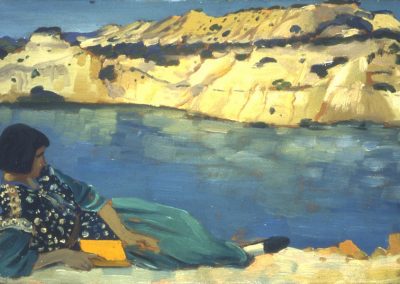 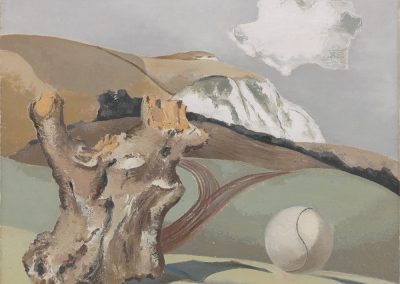 EVENT ON THE DOWNS

Vanessa Bell and members of the Bloomsbury Group holidayed in Studland and painted there. Mark Gertler visited his patron in Swanage and did the same, Henry Lamb had settled in Poole and after WW1 an ex-Slade pupil, Stanley Spencer visited him there.

Francis Newbery who had been born in Bridport settled in Corfe Castle when he retired from the Glasgow School of Art. Many of his ex-pupils visited him there, Charles Rennie Mackintosh being the most notable.

Many prominent Twentieth Century artists visited Purbeck and painted here including Graham Sutherland who painted his first oil paintings here. They have left behind them a legacy of oil and watercolour paintings but also engravings, drawings, collages, linocuts and a variety of other forms of print, including posters.